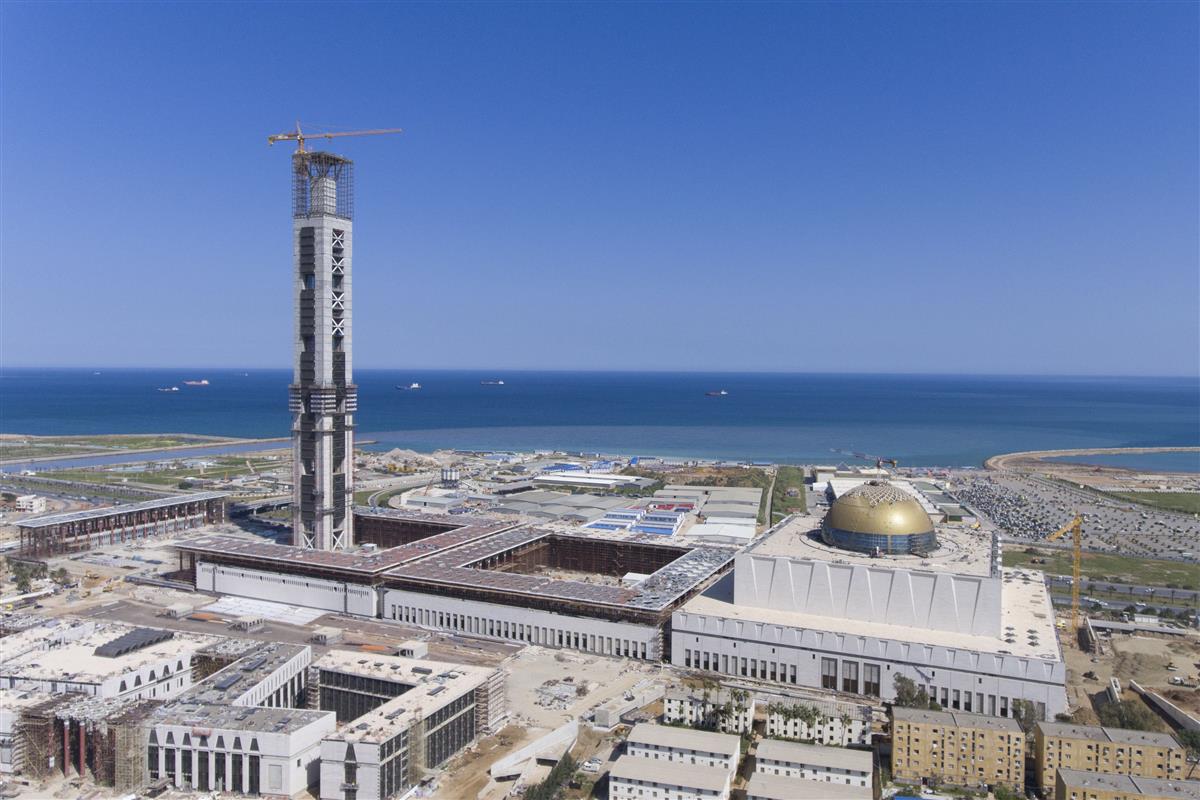 ALGIERS, Feb. 10 (Xinhua) -- Algeria is going to have one of the largest mosques in the world, as the China's State Construction Engineering Corporation (CSCEC) is doubling efforts to deliver this mega project this year.

The 265-meter-high minaret of the Great Mosque of Algiers, or Djamaa El Djazair, could be seen from all places in Algiers. In fact, it is the highest minaret in the world, which is a symbol of Muslim Algeria.

Present in Algeria for 30 years, CSCEC has already been proven in the construction of mega projects, including housing, roads, highways, bridges, schools and hospitals.

Some 2,300 workers, engineers and construction managers are working hard for the timely delivery of the project amid its complexity, its numerous stakeholders, and the financial crisis that hits Algeria in recent years.

"By the end of the year, you will be noticed from the outside that all work will be accomplished," said the project manager Wang Liangxue, adding that "for the sake of meeting deadlines, the workers have been subjected to an accelerated pace."

"They are working 24 hour shifts, and only bad weather could prevent them from working outside," he said.

On the top of the minaret, and after a climb of 37 floors, the bay of Algiers has been revealed in a breathtaking view, yet dizzying to sensitive souls.

On top of this building, located 1 km away from the Sablettes Beach, and halfway between the airport and downtown Algiers, a panoramic view is offered to admire the turquoise waters of the Mediterranean and the ships loaded with goods awaiting for their turn to dock at the port.

On the far south side, the fertile Mitidja plain spreads over tens of kilometers before being hampered by the majestic mountain ranges of the Blida Atlas.

Despite rapid urbanization experienced by Algeria since independence, particularly in large cities such as Algiers, one still distinguishes the green orchards that are the pride of the country, since fruits are still one of the few products that this oil rich nation does not import.

On the west, east and south sides, Algiers neighborhoods offer an alternating show of ancient architecture and modern buildings.

Nothing to envy to the best aerial views that a helicopter can offer to a photojournalist, the minaret of Djamaa El Djazair could serve as a platform to enrich the photo-library that tells Algiers in pictures.

Everything is within reach of an eye, including famous places and monuments of the capital such as the ancient city of the Casbah, the Cathedral of Notre Damme d'Afrique, and El Aurassi Hotel. The city can really be told from the sky while feet are on the ground.

While Xinhua team went from one corner to another to choose the best angles for its shootings, the workers kept concentrated on their work without even looking to us.

"They are dedicated to their tasks, they do not have a minute to lose," said Deputy Director of the Planning Department, Cao Qi, adding that currently, a team is finalizing coating work of the dome.

This task required the installation of a suspended platform of 33.6 meters high, which is technical prowess in the field of construction and civil engineering, Cao said.

On the roof of the prayer hall, 40 m from the ground level, Ali Djema, a young Algerian architect is in charge of monitoring the implementation of the facades of the said prayer room.

Djema revealed that it is for him "a dream comes true" to work in such mega, innovative and ingenious project. He showed how it is possible to shed the light of the day on the prayer hall through a system of reflectors installed between the inner and outer part of the dome.

Meanwhile, rainwater drainage system is also integrated in this project, as it is due to collect rainwater in a huge tank, and then the water will be used for gardens that adorn the mosque.

Once completed, Djamaa El Djazair will be the largest in Africa and the third largest in the world, after the Masjid al-Haram in Makkah and Masjid al-Nabawi in Medina, both in Saudi Arabia.

Also, the mosque will include several independent buildings over 20 hectares, with a built-up area of over 400,000 square meters.

Djamaa El Djazair will also be equipped with a conference room, a museum for Islamic art and history, a research center on the history of Algeria, the Koran House center, commercial buildings, a restaurant, a library, an amphitheater, a plaza, an underground parking with a capacity of 7,000 cars, and outbuildings dedicated to the security and maintenance of the building and its occupants.